Green's has got it!

Well, it's been almost a year since last posting on this blog. Times have changed as the market is being offered a wide range of commercially brewed gluten-free beers. While I've been working on fine-tuning my own recipes, I've been anxiously testing each new beer as it becomes available.

The lull in posting can be attributed to the difficulty these beers have in making it to market. Living in a small community doesn't help either. It has been necessary to purchase directly from the distributor as no local merchant has offered this latest brand to arrive, Green's.

Green's offers a full-range of Gluten-Free beers, but so far only 3 are available through their exclusive US distributor, Merchant DuVin.

So far my favorite is Endeavor with it's Stout-like appearance and excellent flavor. As they are imported from Belgium, they are packaged in an unusual 16.9 ounce bottle.

A visit to the Green's Website offers tantalizing hint of other great tastes they have worked up.

Can't wait to try some of these like Pathfinder and Pilgrim.

Now these Green's Gluten-Free beers can be purchased at Health Food Mart, Inc. in Medford, Oregon. They have committed to supporting the Celiac community and are offering several gluten-free beers, as well as gluten-free breads, snacks, cookies and more!

They are offering a 5% discount on all Gluten-Free items simply by mentioning reading about this offer on the internet.

According to this press release from the Celiac Awareness Foundation and the makers of Budweiser, a Gluten Free Sorghum Beer is being manufactured for National Distribution:

ST. LOUIS (Dec. 20, 2006) – Adults who experience wheat allergies or who choose a wheat-free or gluten-free diet, now have a beer that fits their lifestyle. Redbridge is the first nationally available sorghum beer. Beginning today, Redbridge will be sold in stores carrying organic products and restaurants.

Redbridge is a hearty, full-bodied lager brewed using imported Hallertau and domestic Cascade hops. It is brewed with sorghum and has a well-balanced, moderately hopped taste.

“We set out to create a fine, hand-crafted specialty beer made without wheat or barley,” said Angie Minges, product manager, Anheuser-Busch, Inc. “We’ve made Redbridge nationally available to make sure adults who experience wheat allergies or who choose a gluten-free or wheat-free diet can enjoy the kind of beer that fits their lifestyle.”
Redbridge contains 4.8 percent alcohol per 12-ounce serving. It will be available in 12 ounce, six-pack bottles. Redbridge is brewed at the Anheuser-Busch Merrimack, N.H., brewery.
“Brewing a beer made with sorghum was an exciting process,” says Kristin Zantop, brewmaster, Anheuser-Busch, Inc. “We use only the highest quality ingredients to brew Redbridge as is the case with all our beers. Sorghum is the primary ingredient. We then use the lager brewing process using imported Hallertau and domestic Cascade hops without adding wheat or barley to give Redbridge its rich, hearty taste.”

Posted by ADV Media Solutions at 9:33 AM 5 comments:

Exciting News! A new brewery has been announced that plans on making a Gluten Free line of beers! Based in Arkansas, Dark Hills Brewery, is being started by Gluten Intolerant Brewer.

With a Norse attitude and design, these guys look ready to take on the world with their beers ranging from a Pale Ale to a full Stout! They even plan a Hard Lemonade!

Be sure to visit their excellently designed website : www.darkhillsbrewery.com

Leave a comment, add link, join their mailing list...or just drool over the possibilities as I did!

To read more about our story, check out this article from Northwest Arkansas' The Morning News:

The Other Way by Becca Bacon Martin

“I’ve always been interested in it,” says the Springdale resident, “ever since I found out my ancestors used to have a beer garden in Germany.”

Over time, Leigh put that interest to work, gaining such mastery of her art that she was elevated to the level of Laurel in the Society for Creative Anachronism — the equivalent of being made a knight. Of course, word of her expertise got around, and people began to ask Leigh to make special beer for them: beer without the gluten found in most brews.

“Not all Americans can enjoy a ‘nice cold one’ on a hot summer day,” she explains. “Many (perhaps 3 million) are finding out they have inherited an autoimmune condition know as gluten intolerance, or celiac disease. The remedy is a lifelong diet free of wheat, oats, rye, and barley. The problem is that all traditional beers are made with at least one of these ingredients. So conventional beer is off limits to celiacs.”

Among the people to came to Leigh for help was Constance Rieper-Estes, a celiac herself.

“There just weren’t any gluten-free beers on the market at that time, and I thought, ‘Well, how about if I make my own?’ I looked to the SCA because they go back in time to the beginning of brewing,” she recalls.

When the beer maker and the beer aficionado put their heads together, something much bigger than a friendship was born: Dark Hills Brewery, which the partners hope will become the first completely gluten-free brewery in the country.

“We have gone through all the necessary channels to start our business the right way,” Leigh says. “We have joined the Brewer’s Association, have attended the Craft Brewer’s Conference in Seattle, have toured countless breweries, have had the world’s largest brewery installation groups collaborate on the brewery’s building plans, have worked closely with the government to ensure a proper category to sell gluten-free beer under, and have worked with the University of Arkansas Sam M. Walton College of Business Small Business Development Center to build an effective and realistic business plan.”

Along with that business plan, which they say the bank called “the best, most complete business plan they had seen in 10 years,” Constance has 12 years of experience in restaurant management. Leigh has a degree in microbiology and years of expertise as a brewer. They’ve put down earnest money on 3 acres — complete with three buildings — in Washington County between Fayetteville and Springdale. In other words, they have everything they need — except about $3 million.

“We could start smaller,” Constance admits. “But the three breweries in this country that make gluten-free beer right now started out with very small setups. By one year, their size had doubled, and it doubled again in the second year — and still no one can buy gluten-free beer because it’s not on shelves. They were just trying to satisfy a few friends in a local community, and it turned out to be a worldwide need.

“Gluten-free beer wouldn’t be just a sideline for us. We would be a complete gluten-free brewery, hopefully with six or seven gluten-free beers. The most difficult part has been locating angels to help with the necessary start-up capital.”

Obviously, Dark Hills Brewery is looking for those “angels.” I don’t have $3,000, let alone $3 million, and the extent of my business acumen is that I love to shop, so don’t take this as any kind of official endorsement! But if you’re interested, you can visit www.darkhillsbrewery.com and see what you think. I will say it seems like there’d be no better place than Northwest Arkansas to encourage the same kind of entrepreneurial spirit that built Wal-Mart, Tyson Foods and J.B. Hunt Transport.

Posted by ADV Media Solutions at 8:54 AM No comments:

Bard's Tale Beer has finally arrived in Southern Oregon, so I decided to give it a try!

Here is the menu: 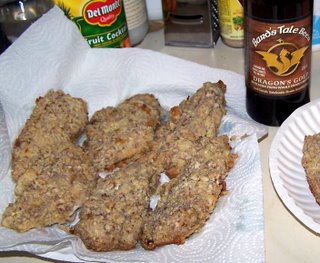 So the chicken is a continuation of an ongoing experiment to re-create our favorite dishes using various Gluten-Free Flour mixes and combinations.

This mix was made mostly from Pamela's Ultimate Baking & Pancake Mix, Corn Starch, White Rice Flour, some spices...added to cup of Buttermilk and Egg mixed together. One cup of diced Pecans were added for extra flavor and texture.

Baked in butter for about 35 minutes...delicious!

So, enjoyed the Bard's Tale Dragon's Gold while concocting this recipe and forgot to take measurements...so you'll have to use your own judgment for the recipe.

For a little background, I have been an avid beer drinker for about 15 years...enjoying primarily obscure micro brews while hiking around the woods. More recently I, and my family, have recognized the fact that we are Gluten Intolerant and have slowly adjusted to the Gluten-Free Diet over the past few years. This blog is a factor of this process.

One of my favorite beers is Alaskan Amber Ale. Both for it's color and complex flavor...as well as the fact that at one point I used to live just a few blocks from the brewery and enjoyed many samplers after work!

When I say that this Bard's Tale beer is reminiscent of the Alaskan Amber, it is a testament to the quality that is going into this brew. The color is much richer than I expected, great body...but certainly thinner than Alaskan.

UK Brewer, Hambleton Ales, has successfully negotiated with the FDA (and it's insane food labeling laws) to allow for importation of their popular GFA (Gluten-Free Ale) but under another name..."Toleration."

According to this article in the York Press, 20,000 bottles were included in this first shipment which will be distributed to 33 states.

Great news! Bard's Tale Beer owner, Craig Belser, is bringing a proposal to the small town of Cannon Falls, Minnesota...he would like to re-open the town's idle Minnesota Malting malthouse in order to produce Gluten-Free Malt for beer making, as well as other Gluten Free food ingredients.

His partners in this venture, True Source Foods, Inc. and Progressive Rail seem to fit the vision of a nationwide distribution network.

Read more about this exciting development in the Cannon Falls Beacon here.
Posted by ADV Media Solutions at 11:34 AM No comments:

If no Gluten...then how is it beer?

Technically Gluten-Free beers contain a form of Gluten...just not from the traditional grains of Wheat, Barley, Rye or Oats. Other grains off limits include triticale (hybrid of wheat and rye), spelt (sprouted wheat), and kamut.

Many I have discussed this topic with say, "If it doesn't have Gluten it can't be beer."

The truly traditional would tell you that if it doesn't contain Barley it can't be beer.

But in many countries in the world they ferment local grains to make alchoholic beverages, for example, in Africa they have Sorghum. In fact, even Guiness brewed in Africa uses some Sorghum grain in the process.

Many possibilities exist, and various combinations of these grains might produce a very tasty Ale!

Give it a shot and send us a recipe or two for adding to the recipe section!
Posted by ADV Media Solutions at 12:47 PM No comments: